The Television is the important part of our life. It is a useful product that gives a lot of advantages by providing us news, information, helpful programs and talk shows on education, health, politics and on general interest. 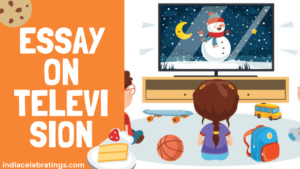 The essay on TV its role, benefits, importance, advantages and disadvantages in few points and lines for Children and students of UKg kids class 1,2,3,,4,5,67,8,9,10th level students.

Essay On Television; Benefits, Importance & Role in Our Life

Television is an audio visual electronic machine through which radio signals are transmitted into air received by television.

It was first invented in 1927. Philo Taylor Farnsworth invented this machine to transmit images remotely with a machine in a screen, it was named Television.

A number of modifications and changes have been brought in its size and shape to improve the quality of picture and voice.

Television is an important source of entertainment, knowledge and information. It started appearing in the early 80s and has become an integral part of each house.

It is a rich source of information and knowledge. Many informative, instructive and inspiring programs are released through television which broadens insight and vision of listeners. Specially educational programs are very helpful for students.

Related to different subjects and fields many tutorial channels are running on television which cater needs of various types of listeners.

It is an effective medium of learning and teaching. Both formal and non formal education through television help students to groom young and adults.

Apart from it many historical channels, discovery channels and National Geographic channels based on science help impart knowledge in students.

Television is very entertaining machine used at homes. All family members gather at television and get entertained watching different comedy programs and movies.

Those who watch television remain up-to-date. After every hour news is presented which make one know what is happening throughout the world.

All types of current issues like social, religious, political and economical update throughout the world reaches listeners at home. Television is a boon to humanity.

It is not only a boon to mankind but it bears many negative impacts too. Specially our young generation is heavily adopting the western culture and alien social etiquette which unfit them in their own society.

There are many movies and programs which make them socially weak, corrupt, arrogant and violent which is against the grain of humans.

Many people have lost their normal eyesight watching TV in excess. The addiction of TV is entirely unbearable because students waste their precious time watching cartoons and different dramas and programs on TV.

Young generation has become introvert because addiction of TV makes them inactive and hardly go out and intermingle socially.

Children watching TV round the clock become visually impaired. If we have look at past, people were very social but this invention has destroyed social relationships, man has become bound in homes, in their free time they switch on TV and kill their free time watching TV instead of being with others. Psychologically man is undergoing drastic changes which are entirely undesired and unwanted.

Television is best source of knowledge, it is very informative tool and cheapest medium of entertainment. It improves family relationships and strengthens family ties.

Some programs of TV are very motivational, which changes the life of an individual. There are many disadvantages of TV too, it presents violent content, causes health issues,makes people introverts and creates psychological and social imbalance.