Mahatma Gandhi, or the Bapu, is the heart of Indians. His life is the living example of struggles, commitment, dedication, peace, patience and the love of humanity.

Mahatma stood for the rights of common people. He organized Indian through his various movements for the justice and freedom of Indian sub continent.

Mahatma Gandhi has been the leader of a kind caliber. He is a universally acknowledge leader. The following essays & Paragraphs describe his life, struggles and achievements in detail.

Read here, detailed essays and Paragraphs on Mahatma Gandhi, excerpts from his biography, achievements and lessons for students.

These essays are long and short, simple, easy to understand for Ukg kids, primary, High school and college level students. The essays are being updated gradually to fulfill the needs of students. 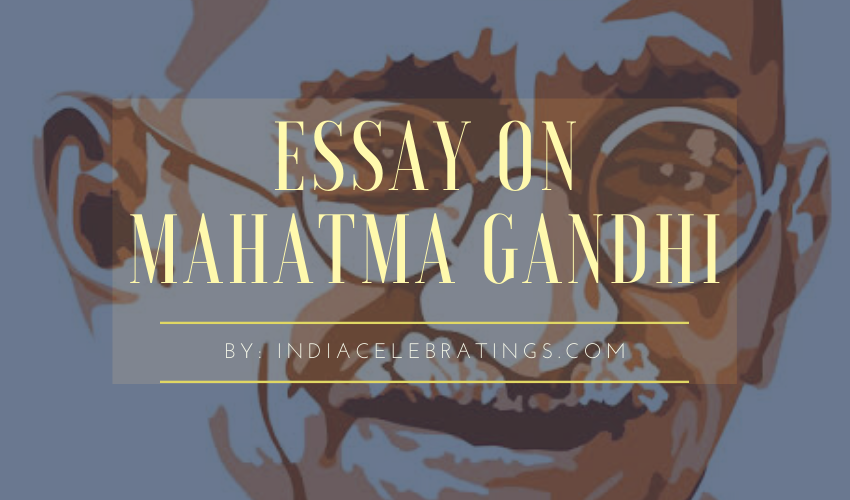 Gandhi worked day and night tirelessly and selflessly for the independence of India. He was not only the harbinger of hope for Indians but for many people throughout the world. For the freedom of India he paid unparalleled efforts and struggles.

He played an instrumental and rudimentary role to reform political and social condition of India. He was called as the great reformer who eradicated many social evils and fought wordy warfare for the justice and equality.

He also worked for the sustainability of environment, he tried to reduce the consumption of the natural resources even of food.

In the memory of his contributions the UN declared 2nd October as the international Day of Non-violence, it is commemorated every year to preset honor to Mahatma Gandhi. He didn’t want to shed even a single drop of blood to achieve independence.

He was very simple and dedicated person. His strong ideals of life were SATYA means truth and AHIMSA means Non-violence.

He used to declare that “ The best way to find yourself is to lose yourself in the service of others”. He was the strong advocator of the non violence. He sought independence through his non-violence movement.

His efforts and struggles are a lesson to new generation specially students are the real architect of the nation.

His contributions and life is an inspiration to leaders and students, the great leaders like Martin Luther King Jr and Nelson Mandela were highly influenced by Gandhi.

He once stated that “Be the change you wish to see in the world”. He believed in simple living and high thinking, students must live simple and think high to succeed in life and to bring revolutionary change.

He strictly abstained and avoided meat, alcohol and promiscuity. He adopted vegetarian diet and motivated others to adopt it too.

He advocated simplicity in life, his life teaches us to give up unnecessary spending of money or resources.

His faith teaches us equality. Students must not cater element of discrimination among themselves. They wear same uniform when they are enrolled in any school.

They must react unanimously and always stand United among themselves. Unity and discipline is very necessary for all students.

His life teaches students to stop consuming more then they need and to avoid premarital sex. Always be simple, simplicity means to be happy with what you are given or have.

Gandhi was very active in the service of humanity and he preached activity in work. All students must not procrastinate and waste time, they must be active and agile to their responsibilities.

Gandhi teaches that faith in God is the foundation of all moral values. Once Gandhi said that a man is but the product of his thoughts, what he thinks he becomes.

When Gandhi sahib went to British colony of South Africa to practice his law, there he got differentiated from the light skin people because of being a dark skin person.

That’s why he decided to become a political activist in order to do some positive changes in such unfair laws. Later he returned to India and started a powerful nonviolent movement to make India an independent country.

He paid his great and unforgettable role for the independence of India from the British rule. He was a great social reformer and a strong supporter of agriculture and motivated people to do agriculture.

Gandhi always believed that weapons are not the only answer for any problem, in fact they created more problems then they solved.

Non violence is one of the best methods by which we can fight with much powerful enemies without holding a single weapon.

As a great freedom fighter, he got arrested and sent to hails many times but he continued fighting against British rule for the justice of Indians. Even after getting died many years ago, he is still alive in the heart of every Indian as a father of the nation.

He was not born as great but he made himself great through his hard struggles and works. He was assassinated on 30th January. 30th January is celebrated every year as the martyr day in India in order to pay him homage.

10 Lines Essay on Mahatma Gandhi for Children and Students 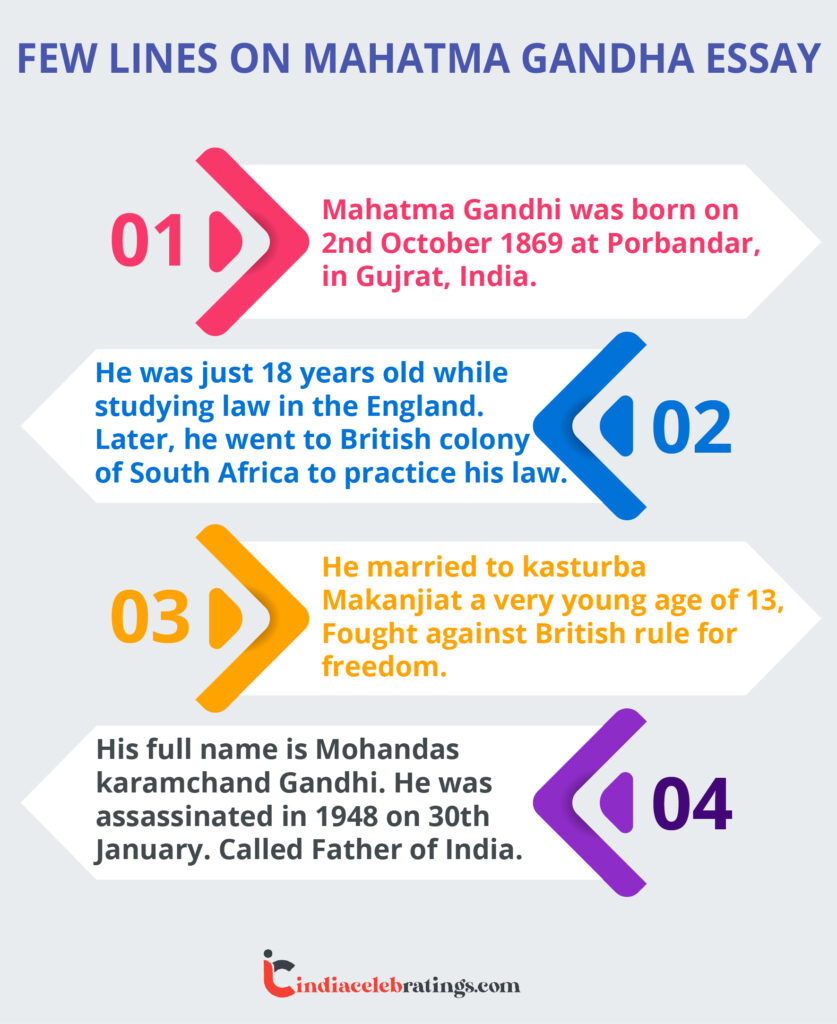 2. He is called Mahatma because of his great works and greatness all through the life

3.  He was just 18 years old while studying law in the England.

4.  Later, he went to British colony of South Africa to practice his law.

5.  He married to kasturba Makanjiat a very young age of 13.

6.  He is called as the Bapu or Rashtrapita as he spent life in fighting against British rule for freedom.

8.  He is known for his non violence movement.

10. He is called as the father of India.