Republic day 2020 is to be celebrated all across India on 26th January. This day is of prime importance in the history of India. Read here best selected essays & speeches on republic day India 2020 with introduction, outlines, conclusion, quotes, images, posters etc. 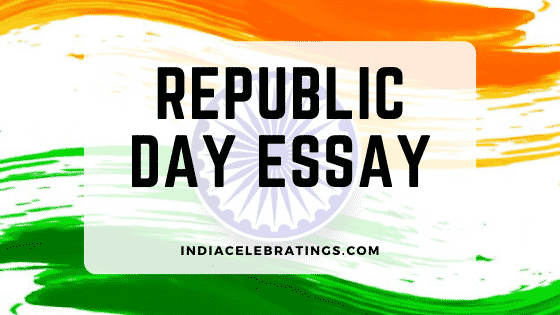 The Republic day of India is celebrated in regard to the birth of the constitution of India, presented by Dr, B.R Ambedkar who is known as the “Architect of Indian constitution”. The constitution provides basic fundamental rights to the citizens which help them to lead a comfortable life.

The constitution also gives the right to choose the government in the hands of its citizens, which is by the people, of the people and for the people. On this day India became sovereign, democratic and Republic state in 26thJanuary 1950. Actually the constituent Assembly adopted the constitution on 26th November 1949 but it came into effect on 26th January 1950.

This is the very day on which India became independent and started exercising own rule or self rule.
On this day salute of 21 guns is given after unfurling of the Indian National flag by the president. It is the day of much significance for every Indian citizen and is celebrated with lots of enthusiasm and joy throughout the country by organizing different activities.Indians celebrate Republic day with a feeling of Nationalism and patriotism.

Republic day is of great importance in the history as it tells us all about each and every struggle of Indian freedom. On this day India was declared as sovereign, secular, socialistic and democratic Republic. Democratic Republic means that the people of India has power to choose government for their country.

The democracy which have been received should be valued by everyone and should not be taken for granted. Everyone should contribute their bit for the development of the nation and spread peace, love and harmony.

The hard work and intelligence of Dr, Ambedkar and the members of the drafting committee helped India to become a Republic nation.


1) Republic day is the national festival of India, it is celebrated on 26th of January.

3) The constitution is the Supreme law of India.

4) Baba sahab BhimraoAmbedkaris the father of the constitution of India.

5) On this day national anthem is sung and national flag is hoisted.

7) Republic day is observed as a national holiday in India.

8) It is the day which showcases the defense capabilities of India to the world.

9) On this day people pay tribute to all freedom fighters who sacrificed their lives for the cause of independence of India.

10) Many events and cultural programs are organized in schools to pay homage to freedom fighters of India.