The winter is the joyful, chilly and cold season. It is the favorite season of many people. The winter is the period of snowfall when the earth wears white beauty. Read essays on the winter season, its importance and benefits for us. 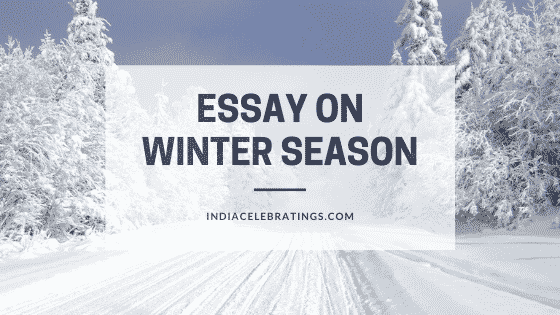 The essays include 10 lines, 5 sentences and more lines on winter, short essays and paragraphs on winter with outlines, quotes, introduction for children and students of Ukg kids, class 1,2,3,4,5,6,7,8,9,10th and college-level students.


Winter is one of the four seasons that begins in December and lasts until March. The winter days are bright and pleasant due to the low intensity of sun rays. This season poses some problems for poor people as they do not have warm clothes and proper houses.

Fog and haze are very common during winter season which causes several road accidents. In This season many animals go in hibernation due to unbearable cold weather. Generally the period of winter season lasts for three to four months.

During this coldest phase of the year, the hilly regions get covered with snow and temperature drops to very low level. We have to face high degree of cold and high speed of cold winds during this season.People prefer hot tea and coffee. As the rays of the sun are not so high during winter. Wheat is harvested during this season.

During winter season people love to visit hill stations and there they play with snow. In this season we often see droplets on flowers which were frozen that looks like pearls. A sip of hot coffee in the morning gives us pleasurable experience. We find healthy fruits like apples, oranges and grapes.

1) Winter season is the coldest season which starts in the month of December and lasts till mid of March.

3) December and January are the coldest months of winter season.

6) It is the season of healthy fruits and leafy green vegetables.

7) Many birds and animals hibernate in the winter season due to extreme cold conditions.

8) Various beautiful birds like Siberian cranes migrate to India and Pakistan during this season.

10) Everyone wears warm woolen clothes in winter to keep the body warm.