The climate change is the sad reality of our world today. The environmental change due to global warming has various causes and impacts on our life. Read here best detailed essays on climate change with definition, causes, impacts and possible solutions how to control climate change 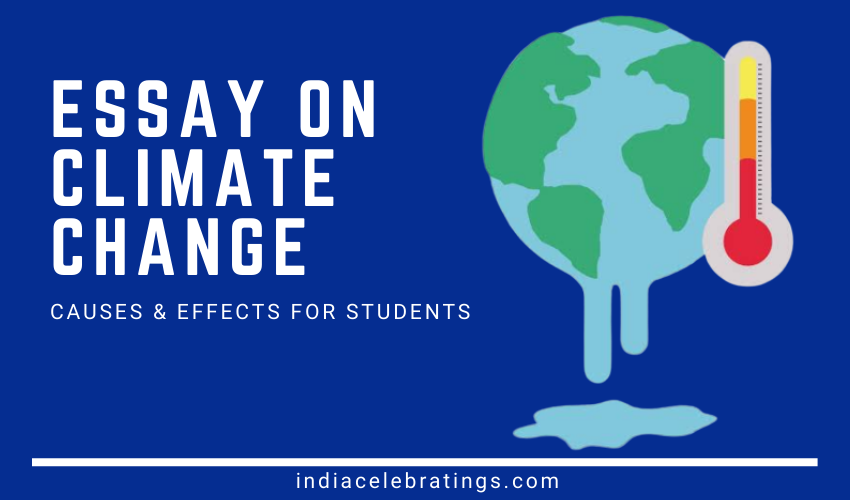 Climate change is known as the change in climate, it takes decades to change and it lasts for decades.Climate change is caused by internal and external mechanisms both include natural and man made factors that force climate to change.

Human activities such as deforestation, land degradation and water and air pollution has brought climate change. The trees are the source of survival, trees regulate the climate by absorbing Caron dioxide present in the atmosphere but unfortunately trees are being cut down mercilessly.

Fossil fuel combustion and burning of industrial wastes and vehicular pollution are main causes of climate change. Burning coal, oil and gas produces carbon dioxide and nitrous oxide which are harmful for atmosphere.  The recent climate change is mainly caused by global warming. Global warming is on the rise due to human activities which are entirely opposite to healthy environment.

The changes in greenhouse effect which affects the heat retained by earth’s atmosphere and variations in sun’s energy reaching the earth are major factors of climate change.
The plant protection products like fertilizers, pesticides and insecticides and chemicals release nitrous oxide which harms our atmosphere.

The ever increasing livestock is also a cause of climate change, the cattle produces methane while digesting their food.  The mining industry also contribute a lot in the greenhouse gas emissions.

Many dangerous diseases have spread that have caused death of plants and animals. Humans are also facing its negative impacts. The biodiversity is declining and many species are subjected to go extinct. The beauty of our environment will vanish with the extinction of species of plants and animals.

Many species of animals and plants have become extinct. Mass extinction of trees is caused by clearing away of forests. The survival of many birds and animals have become difficult. The balance of natural environment is has disturbed due to climate change, specially melting of glaciers and erratic pattern of rainfall and change in seasonal rains have caused havoc in environment.

Not only humans but plants and animals too are suffering from floods and droughts that are a sort of calamity. These natural calamities are caused by climate change. The loss of sea ice and intense heat waves are very dangerous for the survival of all life forms.

The level of harmful gases like carbon dioxide has increased in the atmosphere which affects health, many respiratory and cardiovascular diseases are increasingly due to water and air pollution. The amount of heat trapping gases emitted globally will increase the magnitude of climate in next two decades.  Hurricane-associated storm intensity and frequency has increased and will increase more if climate continue to get warm.

Many metropolitan cities of the world are on risk with the rise in sea levels, those cities including adjacent regions are supposed to face the storm surges and high tides and flooding can cause the loss of lives and damage.

Solutions; How to Control Climate Change?

Climate change can be controlled by

1. Using renewable energies and running away from fossil fuels.

2. Reducing our consumption of energy.

5. Encouraging better use of natural resources.